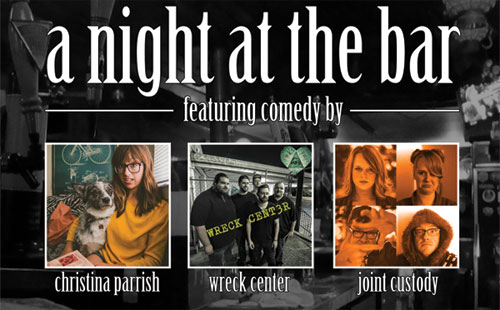 Produced and performed with improv duo, Joint Custody as a part A Night at the Bar, featuring comedy from Christina Parrish (Stand Up), Wreck Center (Improv) and Joint Custody (Improv).

Christina Parrish is an actress and comedian soaked in dog kisses in Austin TX. She has performed at Hell Yes Fest and FunFunFun Fest; her video work has been featured on Funny or Die’s front page and screened at Austin Shorts Fest, LA Shorts Festival and Seattle Sketchfest. Most recently, Christina wrote and starred in a pilot that was featured as an IndieWIRE Project of the Day.