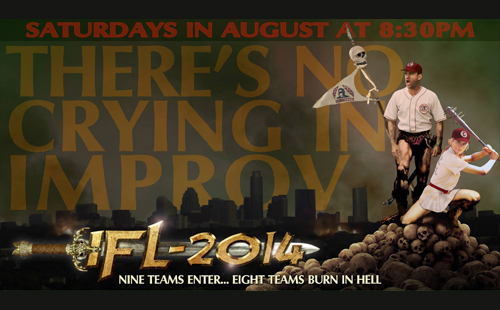 The Improv Fantasy League is an annual month long comedy tournament hosted by ColdTowne Theater. Over 100 participants from Austin’s improv comedy community have signed-up, and been be drafted onto one of nine teams.Each week three of the teams will battle against each other by performing improvised comedy shows for audience votes. The favorite team from each week will advance to the Final Round on Aug. 23rd where one group will be crowned the champions of Austin Improv!8/2 – McNeil DeGrasse Tyson vs. Koenig Kreeps vs. Dirty 6 Dozen 8/9 – The Montopolis Monster Squad vs. The George Hamilton Pools vs. Take Your Slaughter to Work Day8/16 – The Shoal ‘Nuff Creeks vs. The Mueller Purselleys vs. The Sixth Street Sense8/23 – Grand Finals!