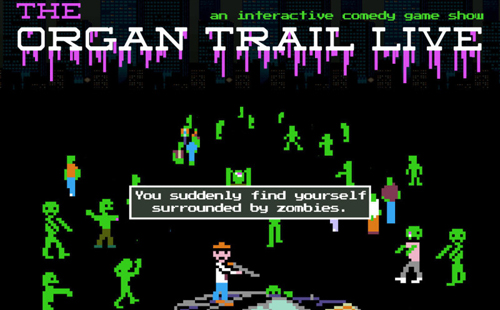 *****This show will feature LIVE SPLATTERING BLOOD EFFECTS & is BYOPoncho!*****

The Organ Trail Live is an interactive horror-comedy game show based on a zombie version of the classic computer game, The Oregon Trail.

Audience members will take on the role of survivors during a zombie apocalypse who must work together to guide their caravan of station wagons to safety along the West coast.   A huge and hilarious cast of Austin improvisers will bring the game world to life as they play the roles of fellow survivors, colorful characters met along the journey, and brain-thirsty Zombies.

The audience will be asked to vote and make key decisions throughout the show that will shape each night’s story and make every performance unique. The group may have to decide how to attempt to pass a horde of zombies, or how they will address a sudden onset of dysentery.

Those in the audience who would like to be more involved may enter their names into a drawing to participate in challenges throughout the show. For example, someone may be asked to shoot (foam darts) at zombies to fend them off while scavenging for supplies. That audience member’s aim and dexterity will determine the outcome for the rest of the group.  The goal is to get to Safe Haven on the West coast with as many survivors still alive as possible.

Several will likely to perish along the way…

At the end of the evening a prize donated by Austin’s best game store, The Dragon’s Lair, will be awarded to the audience member who acted as the group’s most valuable survivor, and everyone who participates will receive a small token of appreciation.

PLEASE NOTE: This show will feature LIVE SPLATTERING BLOOD FX. We encourage you to bring your own rain poncho, or to wear clothing that you would not mind getting some fake blood on. Ponchos will also be for sale at the box office.

Tickets to the show are $5 online or $8 at the door: http://www.coldtownetheater.com

8:30pm every Saturday in October at ColdTowne Theater.

One million thanks to our sponsor, The Dragon’s Lair, and to the developers of the Organ Trail, The Men Who Wear Many Hats.